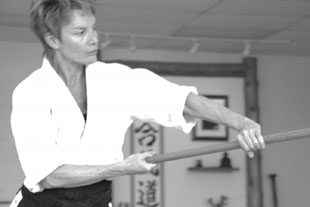 Khalifah Saqi’s introduction to Sufism occurred in mid-2001 during her first year of Clinical Pastoral Education (CPE/Chaplaincy) training at St. Mary’s Medical Center in San Francisco, California. Khalifah Saqi met Murshida Rabia Perez-Chisti through a mutual friend, and experienced love at first sight and sound for both the Sufi Message and for Murshida Rabia as her Spiritual Mother. Previous to this meeting, Saqi’s spiritual path had begun in Roman Catholicism, moved through multiple expressions of Anglican and Protestant Christianity, touched Taoism, and found acceptably solid ground in Mahayana Buddhism. She had completed a Bachelor’s degree in Human Development at Cal State Hayward and a Master’s degree in Theology with a focus on Contemplative Mysticism at the Graduate Theological Union in Berkeley, California, and was seeking to expand her understanding of human relationships through chaplaincy training when her CPE supervisor suggested she meet Murshida Rabia. Saqi found in Murshida Rabia a teacher who could not only skillfully guide her to True Nature, but a soul-friend (anam cara) and fellow martial artist who deeply comprehended the power and purpose of bushido.

At the time of their meeting, Saqi was in intensive Aikido training with Ichiro Shibata, Shihan at Berkeley Aikikai. After three years of training with Shibata Shihan, Saqi moved with her partner to San Diego, where they both continued their Aikido training with T.K. Chiba, Shihan — noted (some say notorious) student of Aikido founder OÕSensei Morihei Ueshiba. Under Chiba Shihan, Saqi attained the rank of Sandan Fukushidoin (3rd degree black belt certified teacher), and presently teaches Aikido weapons classes at San Diego Aikikai.