The Five Pillars of Aikido Training

This essay is an updated version of Khalifah Saqi’s qualifying essay for the rank of Fukushidoin
on the topic of Chiba Shihan’s Five Pillars of Aikido Training.

As the Buddha teaches, the root of human suffering is avidya, or “not seeing things as they are” — also translated as ‘ignorance’ or ‘blindness.’ One aspect of this blindness is the notion of duality — that ‘this’ and ‘that’ exist — along with the illusion of separation that we humans experience as a sense of disconnection. As a function of this disconnection, we make distinctions between internal and external ‘worlds’ — for example, who I am ‘on the inside’ (my own mind) and whom I am ‘n the outside’ (what I present to others) can be quite different to greater or lesser degrees. The greater the disparity between the person on the inside and the person on the outside, then the greater the disconnection of self which is then quite logically followed by increased suffering. Of course, the reverse is also possible: less disparity equals less disconnection equals less suffering. Aikido training demands we attend to our own avidya by systematically revealing, confronting, and resolving the disconnection between our inner and outer worlds, thus leading us along one of countless paths to enlightenment. This is Aikido as Dharma Teaching, and T.K. Chiba Shihan’s Five Pillars of Aikido Training represent his unique contribution to Aikido Dharma.

As exemplified in the graphic above, my vision of Chiba Sensei’s Five Pillars of Aikido Training involves an expression of each ‘pillar’ representing a component of a circular (or spiral, with the addition of depth and dimension) organic process occurring within an environment or matrix comprised of the most fundamental and vital ingredient, ‘awareness.’ The process transpires within awareness and is simultaneously motivated and nourished by it. Each component builds upon and into its successor with the aid and energy of awareness; continually spiraling until such time as either its inward (centripetal) trajectory reaches a unitive state in a ‘still point’ wherein the process is extinguished and nothing but awareness remains, or its outward (centrifugal) course grows ever more broad and deep until it diffuses into yet, again, a unitive state of awareness. Thus, the unitive state can be found in both contraction and expansion. That is enlightenment. Now how does all that play out in the ‘real’ world?

Awareness is the air — I am swimming in it, but I am asleep, and I am suffering. I walk up to the door of the dojo, and stop at the entrance to bow. As I step into the building I am no longer in the ‘outside world,’ but have entered the dojo; the symbolic representation of the ‘inner world.’ From here each step I take draws me more deeply inward: I bow to Mrs. Chiba, I remove my shoes, I perform a full prostration, I walk to the entrance, I bow to the kamiza — each act in the ritual progression through the dojo is meant to take me into a more profound centeredness — the presence of awareness in and of my core ‘self.’ It is during warm ups that the wholeness arises. My awareness is moving out from my center and suffusing my entire body — I can feel every nerve, every muscle, every bone and organ as I stretch and bend and turn and breathe. Wholeness deepens into openness as the movements graduate from solitary warm ups to partnered techniques. I extend my awareness outward to encompass my partner and myself as I create an opening for my uke to attack or seize my nageÕs opening. The encounter progresses into contact with my partner — our mutually aware centered and whole openness connects, and the blending of that energy creates more life, or liveliness. The experience and awareness of this greater life deepens and strengthens our respective (and mutual) centeredness, which in turns leads to greater wholeness, which leads to more openness, and etc. On it goes until we finally wake up from this illusion of duality and wonder what all the fuss was about.

This process is not only the nature of the Aikido encounter, but of all life encounters. Whether I am ‘on the mat’ or ‘off the mat,’ I continually meet other beings and communicate my ‘self’ to them. If I am suffering mindlessly in my illusion of separation and duality, then the internal-self/external-self disparity is great, and my encounters will be fruitless and unsatisfying. It is awareness first and foremost that makes the process in any way real, meaningful, or even possible. In the circular representation, awareness is the matrix within which the Five Elements can be visualized as a spiraling process of spiritual growth and enlightenment. In a more linear model (below) awareness is the foundation upon which the Five Pillars stand and the soil from which they grow.

And what do the pillars hold up? Nothing less than the sky. 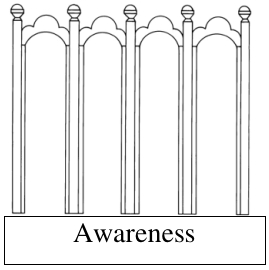